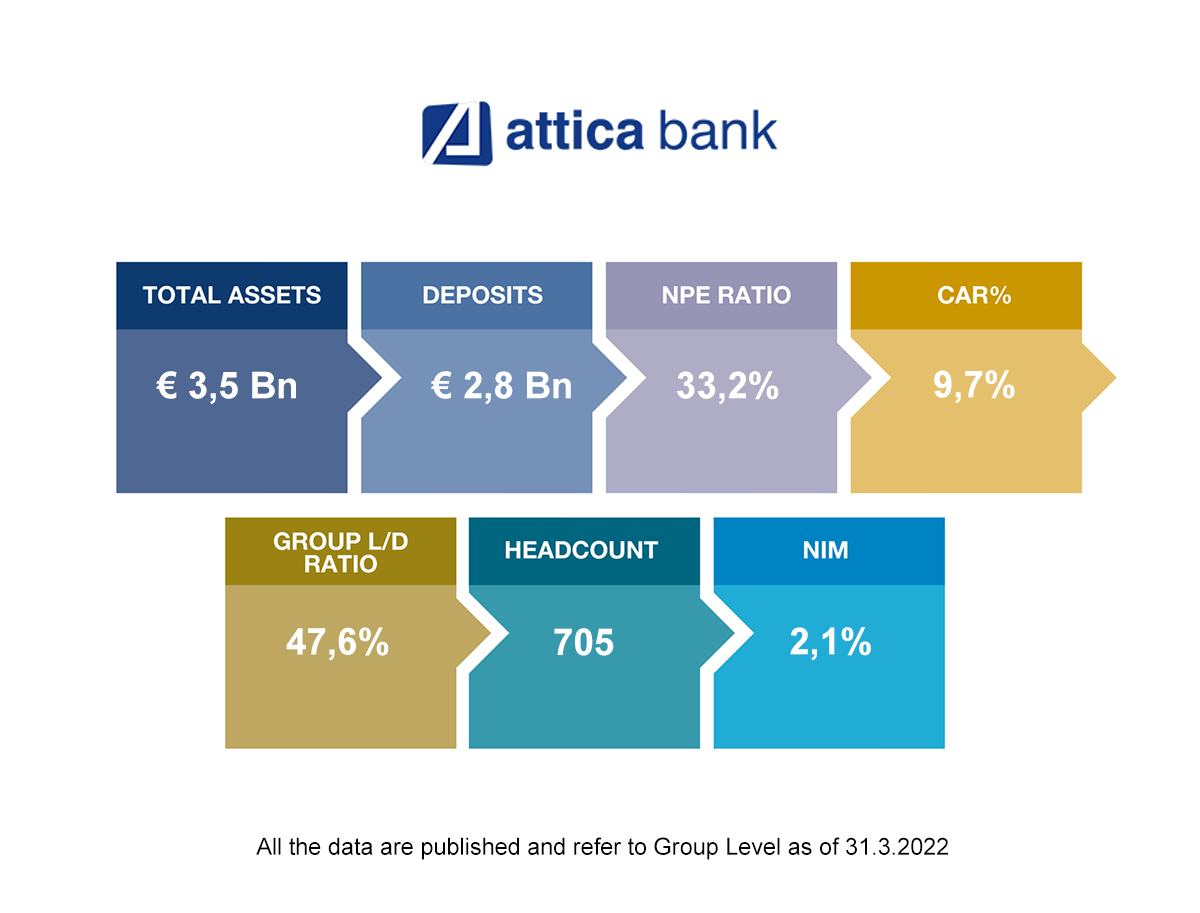 Attica Bank S.A. was established in 1925 and is a dynamic financial services company, boasting a network of 50 branches in the main cities of Greece.

In 1964, Attica Bank was acquired by the Emporiki Bank Companies Group and was listed in the Athens Stock Exchange (ASE). In June 1997 Emporiki Bank transferred though the ASE part of its shares to the Engineers’ and Public Contractors’ Pension Fund (TSMEDE) and Deposit and Loans Fund (TPD), retaining the 17% of the Bank’s shares until September 2012, which was then transferred to PostBank.

On 19th October 2021, the conversion of warrants in favour of the Greek State to common shares was concluded, in the context of the activation of the provisions of art.27A of L.4172/2013(DTC).  The Bank’s shareholding structure, as a result of the warrants’ conversion, is the following: Hellenic Financial Stability Fund (HFSF) holds 68.2% of the Bank’s common ordinary shares, Civil Engineers and Public Works Contractors (TMEDE) holds 14.7% and Unified Social Security Institution (EFKA) holds 10.3% of the Bank’s common ordinary shares. Other shareholders hold the remaining 6.8% of the Bank’s share capital. On December 2021, following a successful Share Capital Increase of €240 million, HFSF holds 62.93%, which corresponds to 770,360,059 voting shares of common registered shares.

Long track record in financial services including C-suite positions in both Insurance and Banking. CEO of Interamerican Group and Ethniki Insurance, General Manager of Retail Banking of National Bank of Greece, and Emporiki Bank (Credit Agricole Group), Chairman of the BoD of the Single Liquidator PQH and member of the Supervisory Board of the Hellenic Corporation of Assets and Participations. Former Chairman of the Association of Insurance Companies of Greece and member of the executive committee of the Hellenic Bank Association. Currently a senior advisor and founding partner of SYNERGON Partners focusing on consulting and transactional projects. A qualified actuary with a degree in Mathematics and a postgraduate degree in Actuarial Science. As of February 8, 2022, he also holds the position of Vice Chairman on the Board of Directors of Attica Bank.